What Are You Working At?

Mathew 12.30 observes, this is war, and there is no neutral ground. If you’re not on My side, you’re the 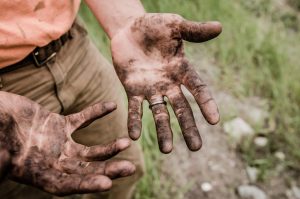 The destiny of all people is one of two ends, heaven or hell. Those who reconcile themselves to God through Christ enter heaven, those who reject Jesus as God and Savior are sent to hell for they have rejected the means of God’s salvation. Daily millions die, their destinies set by their choices made while they lived on this earth. Casualties far greater than all the wars of men.

God has left the Church on earth to accomplish His mission of proclaiming reconciliation to Himself through Jesus the Savior. All Christians are commissioned to witness to Jesus’ life, death and resurrection and to teach obedience to everyone everything Jesus has commanded us. Those who engage this work are allies of God but those who ignore this mission are His enemies even if they claim to be His children.

Every Christian should be measuring themselves by their actions at helping advance the Kingdom of God on earth as it is in heaven for this is the work of God given to His people to complete while they are living on this earth. God does not command us to sit in church on Sunday and then try and be good on Monday. God commands us to meet together to encourage one another toward love and good deeds the result of which is the expansion of His kingdom upon the earth.

We are a holy people so ordained by a holy God Who has given us a holy work: the building of His Church which begins with repentance and reconciliation and culminates in obedience leading to Christ-likeness. Our vocations are God’s means for paying for our occupation which is the priesthood of all believers, the work of making disciples in all nations.