Revelation 11.18 promises, it is time to judge the dead and reward your servants the prophets, as well as your holy people, and all who fear your name, from the least to the greatest. 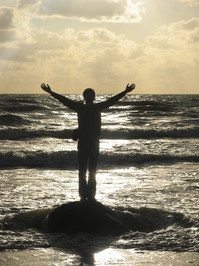 In the end everyone stands before God to be judged. Those who lived in relationship to the Father through the Son by virtue of the Spirit will be rewarded for their deeds accomplished for God’s glory during their lifetimes. Those who denied the Son, ignored the Father and lived apart from the Spirit will be condemned to live forever in torment with all those who choose to live the same.

Its not that good people go to heaven and bad people go to hell. The Bible describes all people as broken and in need of a Savior. Its that some people have humbled themselves before God and sought adoption from Him through the Son, Who is Jesus the Savior Whose birth we now commemorate.

It is the adopted children of God who live forever with God. This adoption was made possible not because they did good but because Jesus did good and appropriated His perfection upon His ‘adoptees’ while simultaneously taking their punishment for their disobedience upon Himself at the cross. The result of adoption is eternal life on a new earth with God the Father, God the Son, God the Spirit and God’s children who loved Him from all time, from all places, and from all languages.

Eternity is eternal life with God and one another made possible through the life, death and resurrection of Jesus Who is God and Man so that God can be both Savior and Lord. Its not complicated really but it does require people to make a choice.

This baby that we celebrate entering our world during Christmas grows to become the Savior of the world whom men sought to kill because we could not accept God’s ways as The Way. God cannot be killed by men so the human body He possessed rose from the dead to become the glorious body of the living God made visible and personal so that all those who love Him can see Him, feel Him and relate to Him.

If all things are possible for God why do we doubt He can become one of us in order to adopt some of us? While God desires all of us to be reconciled to Him not all of us will accept God’s ways choosing instead to live as god until that day we meet the one true God and miss the reward that could have been ours had we just humbled ourselves before Him and loved Him by doing good for His glory on earth as it is in heaven.