The Fools Will Win the Culture War

1 Corinthians 3.18 commands we stop deceiving yourselves. If you think you are wise by this world’s 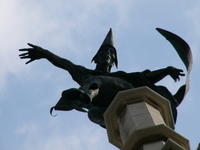 standards, you need to become a fool to be truly wise.

The cultural war around us is a war of ideas. The battle lines have been drawn between God and science and between the Bible and public opinion.

What truths are we talking about anyway that are causing us all this angst? The truth that God is and that He both made us and sustains us by His good love for us. This foundational truth is disallowed in the public school leaving generation after generation to learn that they are cosmic accidents, the result of an exploding rock that morphed into life over trillions of years.

Seriously? That takes more faith than believing in God doesn’t it? By leaving God out of the origin narrative we also leave Him out of the moral discussion. Unfortunately God believes in right and wrong.

While we agree on things like murder, lying and stealing we disagree on marriage, gender and identity. This is the real rub. We don’t like to obey all of God’s commands so we pick and choose what to believe or choose to ignore Him altogether.

How are people being required to disavow God? There is no tolerance in society for those whose belief in God precludes them from participating, supporting or equipping those whose behaviors are Biblically immoral.

Those who ignore God and His ways have no patience, no love and no tolerance for those who oppose their lifestyle choices. Thus we are a culture at war.

Ultimately the fools will win because there really is a God but like their forefathers, they may suffer now for believing in Him and advocating for His ways.