All Religion is not Equal

Luke 10.16 claims those who reject Me are rejecting God Who sent Me. 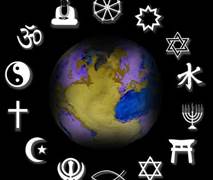 There are many people who believe all religions are the same.

These same people have not reviewed the various religions to realize there are tremendous differences among them.

Christianity is the only religion to claim that God Himself became a human being in order to ensure our comprehension of Who He is and what He requires from us while simultaneously sacrificing His humanity as penalty for all the evil all of humanity has ever done against God.

When God lived among us as Jesus He drew a line in the sand that He must be loved, obeyed and worshiped if people were going to be pardoned by God for their evil deeds done against Him.

No other religion is acceptable to God for pardoning humanity for all other religions deny God has come and lived among us and sacrificed Himself so that He could forgive all those who come to Him seeking eternal life.

If there is a God it makes sense that there is only one God.

2 Replies to “All Religion is not Equal”