Christians Are To Live As Warriors

Psalm 144.1 exclaims, praise be to the Lord my Rock, Who trains my hands for war, my fingers for battle. 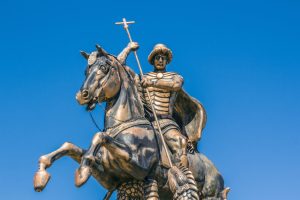 concludes with a blessing upon the nation that is prosperous and successful because the warrior has been successful thanks to the strength and blessing of God.

So too we as Christians are commanded to war against principalities and powers in high places that set themselves up against the knowledge of God. It is the gates of hell that cannot prevail against the power of the man of God sharing the gospel. We are not to be passive sheep but active warriors empowered by the Spirit of God for distributing the Bread and Wine of life from heaven, given to men for living forever.

It is time for Christian men to repent and return to war. To seek God Who prepares their minds for battle, their lips to speak His truth and their hands to serve men and sacrifice their lives before them until they see Jesus and are drawn to His presence.

The man of God must be thoroughly familiar with the Word of God, His Sword, for demolishing strongholds of deception that keep people from believing Jesus is God. They must articulate clearly Biblical truth to humanity so that humanity can stand before God forgiven and accepted by their Judge on that day when all men will be weighed and measured for the lives we lived on this earth.