God’s Goodness is Worth Sharing

Psalm 40.3 records, He gave me reason to sing a new song, praising our God. May many see what God 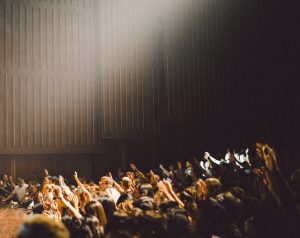 has done, so that they might swear allegiance to Him and trust in the LORD!

I have been a part of the ministry of CBMC for nearly 30 years. I have worked vocationally for the organization for the past 21 years. The reason I love the ministry so much is because it’s process for making God known is so simple and so effective.

The format is a luncheon where a business or professional man simply tells the audience how he met Jesus as Savior and what difference meeting Him has meant in his life. Simple. At the conclusion of the speaker’s talk, an invitation is given for men to begin a relationship with God through Jesus Christ just like the speaker did so many years ago. Simple.

The psalmist would have been a great speaker at a CBMC event. He had been positively impacted by God’s presence in his life. His experience of God created great joy in his heart such that he wanted the world to know how good God really is in order that they too might come to know Him. I have always believed if people could understand Who God really is they would all want to love Him.

Life experience has caused many to think God is bad or aloof. The perspective that God is all powerful causes them to think poorly of God because He did not use His power to stop the bad things from occurring in their lives. These bad things were almost always the direct result of people making bad choices but rather than blame the people we tend to blame God Who seemed to let the people make the bad choice.

What we fail to realize is that the freedom we want to make our own choices, including to love God, is a freedom we have to also make bad choices. The All Powerful does not exclude us from our choices and neither does He keep other people from theirs. While evil exists because people make bad choices God is still good because He comforts, heals, restores and blesses even in the midst of our bad choices or the bad choices of others.

Ultimately God’s goodness is experienced by His promise to recreate a world for us to live upon eternally, where people no longer make bad choices. Instead, the new world to come promised by God and proven by God through the resurrection of Jesus, will be one where we never die, never get sick, never are poor and never experience injustice.

God is good and promises good to come for all those who endure this world and its bad affects with Him. God wants those who know Him and the hope and future He promises, to enlighten others so that they too may have a hope and a future while working through the evils of this world.