How to Get to Heaven

James 2.12 commands we speak and act as those who are going to be judged by the law that gives 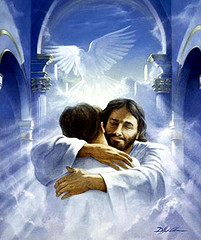 God plans to judge everyone. We inherently know this to be true yet suppress it as much as possible from our conscience. When we do think about God holding us accountable we normally give ourselves a passing grade as to our adherence to His commands.

He wants us to enter heaven, He is not looking to exclude humanity but we have to do a little study before the exam by opening the Bible and reading it then applying His commands to our life.

The half brother of Jesus was a pretty religious guy until he believed. He fit well in with the crowd that tried to get to heaven by doing religious stuff. He would have measured everyone else by how well they adhered to all the religious ritual and commands no doubt finding most people to be living far short of what was needed to enter heaven (a common malady among the super religious).

When God lived with us as Jesus the Savior of the world, He dismissed religious requirements for earning our way into heaven indicating it was an impossible objective since we are inherently disobedient to God from birth. Our constant thoughts, words and deeds that run counter to the will of God reveal daily to us this reality.

Instead Jesus told us to repent from worthless attempts to earn heaven, to stop doing what God considers evil and come to Him humbly seeking a pardon for all of our disobedience past, present and future.

Those who will believe God that He is willing to pardon all evil in our lives only because we ask sincerely and because He paid dearly Himself by dying on the cross, are free from religious attempts to earn heaven. God gives a free pass for those who ask but refuses all those who seek to earn their way into heaven since they reject the payment He Himself made when He lived among us – the ultimate sin against God.

Those who humbly seek God’s pardon are then told by God to live a life of love since they are now free from living a life of performance for either God or man’s approval.

The people of God are now given access to God in order to reveal God to the world by living a life of love for God and others that attracts people to God.

Getting into heaven is easy for us, it is receiving the free gift offered through Jesus Christ. The hard part is believing this is true and living a life of love for God and others that isn’t motivated by selfish desires, like trying to get to heaven.