Why We Need to Read the Bible

Titus 1.16 observes they claim to know God, but by their actions they deny him. They are detestable, 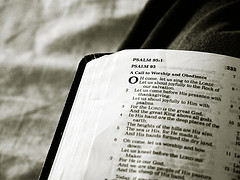 disobedient and unfit for doing anything good.

How can anyone know God? Conversely, if there really is a God doesn’t it makes sense He would want us to know Him?

Assuming God would want us to know Him then the answer to how can we know God is simple: read the book He has given to us describing Himself and His requirements for us. Simple enough, but which one?

While all of the world’s holy books claim to be inspired by God only one was originally produced in three languages by more than forty authors over one thousand years! Only the Christian Bible can make this claim. All of the other holy books were written by one man who had a vision, encounter, or dream then supposedly wrote what he heard god saying to him.

Which is more credible? One guy having an encounter or several guys over hundreds of years whose description of God is consistent yet evolving culminating in the record of His appearance in the Man Jesus Christ.

Since the compilation of the inspired books under one binding we call the Bible, the Christian Church has declared the unequivocal nature and ways of God to a world that has responded in every way from persecution to praise, and from acceptance to angry intolerance.

Yet many who attend Church and claim to know God prove daily by their actions their ignorance of Him. Most people who claim to be Christians are really occasional church attenders who do not read the Bible for themselves. These people depend upon their teachers to deliver to them what God requires from them.

Regrettably, this has proved to be a very unreliable means for forming people into the image of Jesus, Whose Church is His body and bride scheduled to be presented to the Father, pure and undefiled without stain or blemish. God has given us the Bible so that we are without excuse in our effort to know Him and obey His commands.

All we need to do is read the book and do what it says with His promised help. If we do not read the book we develop our own standards of right and wrong, our own understanding of Who God is and how He works in the world resulting in an inconsistent life and message.

God will one day judge every person but not by what they thought about Him but by what He said to us when describing Himself for us through the Bible.