2 Thessalonians 2:10 observes, they perish because they refused to love the truth and so be saved. 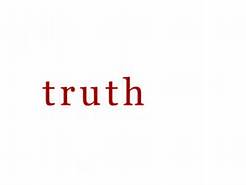 Truth hurts. Most of us don’t really like the truth because it has a nasty way of disagreeing with the way we want things to be.

Truth is not swayed by our will or wishes; it doesn’t change because we cry or scream. We become deceitful and lie in order to create an illusion of truth so that we get what we want.

God says He is truth.

It makes sense that if there really is a God that He would know the truth and be truth personified since we would expect God to be morally pure and unbiased in all of His ways. This is how we know that Hinduism and Islam is not true. Their gods are not morally pure neither do they promote absolute truth without bias or personal vanity.

The One True God is not vain, neither does He fear an honest person’s pursuit of truth whether that pursuit be through science, religion, philosophy or history. In all of these areas the Bible has always been found to be true.

The Bible is the recorded words of God and has been found flawless in its record though some, who despise the truth, deny its words while others seek to discredit its message. All of these detractors have been found to be deceivers and liars because God’s truth requires us to live God’s way and if we don’t like that then we must deny His truth.

God will measure all people by His truth determining their eternal destiny based upon our response to His truth. What is God’s truth?

God’s truth in full is recorded in the Bible but in summary the truth is that He is and is the Creator and Sustainer of all that is or was or ever shall be. God has come to earth as one of us, in Jesus the Savior though we didn’t recognize Him so we killed Him because we refused to accept Him as the Truth.

Since He is God He could not remain dead though the body of Man He lived in was certainly put to death, but He rose from the dead because He is God Almighty showing Himself alive to more than 500 people over 40 days who were commanded to continue telling others His truth. This work started the Church which continues to grow throughout the world to this day.

Finally, the truth is that God will come again and this time it will be to judge each person on their response to His recorded truth. Those who love truth, who love God in Jesus demonstrating their love through obedience to His commands, will be welcomed by God and will live with Him forever.

Everyone who refuses God’s truth will be refused life with God forever and will be sent to live with all those who rejected the truth to their eternal rest of torment and suffering.