Psalm 67.2 proclaims, may Your ways be known throughout the earth, Your saving power among 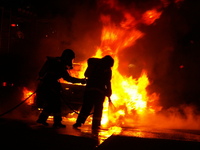 Whenever we attend a funeral someone invariably says, ‘they are in a better place.’ It is said to comfort the grieving but if we thought about it very long we would ask ourselves, ‘if the next life is better, why does God leave us in this one?’

While we remain on this earth what is our lot? At best, old age and all of its accompanying maladies. At worst, more and greater tragedy and loss.

So the question must be considered, if God is good why does He leave us here instead of taking us immediately to the better place? The answer is in the psalmist’s vision of the future.

The Bible likens the world as being on fire. It concludes by stating God will eventually destroy this earth by fire. So why are God’s people still here? Because, God has left His people to live as firemen. The purpose of the Christian is to engage this world on fire and rescue people so that they don’t get burned in the end.

A lot of people don’t know or believe the world is on fire. Their particular room seems fine to them. Yet they too will die and sometime in their life will ask themselves if they really believe that there is no god and that they have no greater purpose than selfish pleasure. When the meaninglessness of life is realized then they are most open to seeking the One True God Who truly is and lives to build relationships with people now so that they can last forever.

They are the firemen who save people from meaningless lives and eternal damnation; the place where all go who refuse to be adopted. The children of God are here for one reason only, win more children into the family of God. Failure to engage this purpose is to leave people broken, hopeless and with a future of utter despair.

The people of God cannot continue to lose sight of their mission. Our best life is not now, it is to come. We are to give our best effort now, to winning as many people now, to the family of God now, for in the age to come, when God returns to live on the new earth, the fire will be out, the children will play and peace and joy shall reign throughout the world.

Until then, God desires all people to be adopted and commands His children to spend their lives left on this earth bringing as many people as possible into His family.