Without God, Why Should We Be Good?

Ezekiel 8.17 asks, have you seen this, son of man? Is it nothing to the people of Judah that they commit these detestable sins, leading the whole nation into violence, thumbing their noses at Me, and provoking 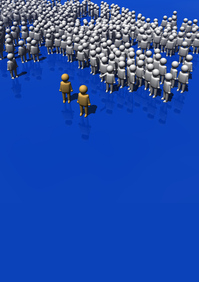 My brother was sharing with me this past weekend about his diversity training class he attended prior to his return to teaching in an inner city school. Perhaps no greater sin currently exists in our culture than racism.

Not since the race riots of the 1960’s has this country been more focused on race and the violence today is escalating to those same levels that Dr. Martin Luther King Jr. preached against. Yet why is racism wrong? I mean, why do those who ignore God consider anything wrong?

It is only Christianity that declared all people came from one set of parents. Adam and Eve contained the DNA to cause all the various colors, sizes and shapes of all people. The Bible declares all colors are created equal. Likewise the Bible teaches equal value for men and women, again, regardless of color. These things are not true of Islam, Hinduism or Mormonism.

The public school teaches humanity is a product of a rock that exploded, gathered moisture, formed an amoeba that grew into a monkey that caused us to be developed. When Darwin marketed this perspective the world bought it immediately. It acted with unprecedented euthanasia all over the world best symbolized by Hitler who planned to eliminate all of the inferior races beginning with the lowest denominator: the Jews.

The world was repulsed by the literal implementation of its teaching of the survival of the fittest. We inherently know what Hitler did was wrong but without the Christian God we cannot explain why. We inherently know we should love people as ourselves regardless of color but without the teaching of Jesus, God Who lived on earth, we don’t know why.

We want to live without having to obey God but we want the commands of God to be practiced among society. How much simpler if we would just teach our children that we came from a loving God Who commands we love one another so that when we face Him on judgement day we can be accepted by Him.

Imagine how much more effective this would be than diversity classes as adults that tell us to be good but for no real reason.