Mark 16.9 records the first person to see Him was Mary Magdalene. 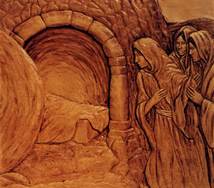 Who was the first person to see Jesus after He was crucified, buried then arose from the dead? A woman from whom seven demons had been cast out of her body.

No doubt this woman, Mary Magdalene, had a sinful sordid past so as to have been pursued by so many demons and as a result was probably not someone with great financial means or influence. . Yet Mary will be forever recorded as the first person to have seen the resurrected Jesus.

Why did Mary see Jesus first among all people?

Not because of her past nor because of her future potential but because of her rising early in the morning to go see Jesus.  Mary was brokenhearted at the death of Jesus and went to His tomb to honor Him only to find Him absent from the tomb but alive in the garden.

Why didn’t Jesus first appear to His beloved disciples who were closest to Him?

The disciples did not believe Him that He would rise from the dead on the third day and so sat wringing their hands about His crucifixion. When Jesus does appear among them for the first time it is with a rebuke for their unbelief rather than as a reward for their loyalty to Him.

Many people want to encounter God but they look at the world and the mess that it is in and wring their hands of hope doubting God cares or is planning to act. Those people don’t see God and wonder why.

A few people pursue God, they make Him their first priority early in the morning, they are brokenhearted at the thought of living life without Him and so are rewarded by God coming to them, revealing Himself before them and living among them as their Lord and Savior.