Philippians 1.27-28 commands we tell the Good News fearlessly, no matter what our enemies do. 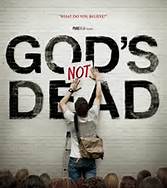 Last night I took my family to see the movie God’s Not Dead. It was an outstanding story of courage to identify with Jesus Christ at great personal cost.

This is one of the greatest needs of our current hour within the American Church: to unashamedly identify with Jesus Christ.

Christians have been so bullied by the media, liberal attorneys and academics into believing they have no freedom to express their faith in Jesus Christ publicly so that most Christians remain silent about their faith and trust in God.

The result of our cowardice is a society becoming increasingly more immoral and more hostile to the ways of God.

The movie portrayed Christians in the manner by which they should be courageous: humble seekers of God whose lives reflect their beliefs without trying to force the world to do the same. These characters did not carry signs condemning evil behavior, they did not shout- down those who ignored God instead they stood-up for God when those around them maligned Him and threatened them with painful consequences for their belief.

God’s Not Dead was a great encouragement to the Church to fearlessly tell the Good News when other people are telling their bad news and wanting to force everyone else into their mold.

Christians should not be obnoxious but humble loving servants of Jesus who seek to encourage everyone to consider the validity of the Christian message that God’s not dead but very much alive and desirous of having a personal relationship with everyone through Jesus the Savior.