The Church Is Responsible For Resisting Abortion

Ezekiel 24.6-7,13 describes, this is what the Sovereign Lord says: Woe to the city 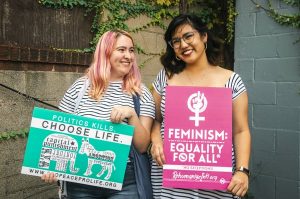 of bloodshed, to the pot now encrusted, whose deposit will not go away! Take the meat out piece by piece in whatever order it comes. For the blood she shed is in her midst: She poured it on the bare rock; she did not pour it on the ground, where the dust would cover it……Now your impurity is lewdness. Because I tried to cleanse you but you would not be cleansed from your impurity, you will not be clean again until my wrath against you has subsided.

The American church has the blood of abortion on its hands. Why the church? It is the salt and light of the world, the leaven responsible for infiltrating the whole loaf. This nation was founded by Christians seeking religious freedom. They didn’t worship the same way but they all worshiped the same God. As a result, we had a nation that held Christian values for more than 200 years.

Since the end of WWII we have lost our spiritual edge and fervor. Broken from the ravages of the war, the Church failed to help people understand how and why such evil could occur or mobilize them to spread the only solution to seeing these things not happen again. People began to question the validity and reality of truth. Today, everyone creates their own truth and to oppose another person’s truth is to incite their rage for they use fear, harm and intimidation rather than persuasion, logic and sound reasoning to demand acceptance of their point.

Without truth we began to believe unborn children are not people at all. From God’s perspective, abortion is the murder of the unborn child. Their blood is on our hands. Pregnancy in these situations most often occurs outside of a marriage commitment, in a moment of weakness, passion and lust. The result is an unwanted pregnancy. The solution, the murder of an innocent child.

The church cannot stop talking about this bloodshed that soils our nation. The church must continue to pursue leaders who will protect our land from more bloodshed. Legal abortion is spilling our immoral blood on the ground, unhidden and unashamed. God will condemn the murderous doctor who remains unrepentant for their heinous crimes. So too the judges, the legislators and the voters who believe a woman’s right to murder is greater than a child’s right to live.

Choices have consequences, sometimes they are hard, but always the One True God requires people to do what is right in His eyes even if the last thing they did was wrong.