Who Is In A Spiritual Battle?

Revelation 12.17 describes, so the dragon became enraged at the woman and went away to make war 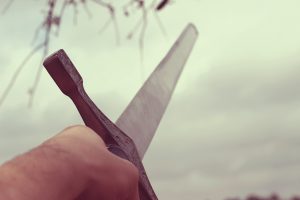 on the rest of her children, those who keep God’s commandments and hold to the testimony about Jesus.

Spiritual warfare is a topic usually resigned to a fringe element of the Christian spectrum. While orthodox Christianity would acknowledge it’s reality most avoid the topic, fewer describe what it is or looks like and even less actually enter into such a world as least as far as men can enter into spiritual warfare.

Most of us common folk, when we say we are in a spiritual battle, if we do at all, mean we are suffering some malady for which we have no understanding as to its cause. We are having a hard time and we don’t equate such difficulty with our sin, and we know God is good, therefore we are left to conclude that we are in some sort of spiritual battle. We see ourselves as victims in a cosmic war between evil and good. Our justification for such thinking? Job.

Our verse today describes the true human army of God and therefore the focus of God’s enemy Satan. The human army of God, the target of Satan’s arrows are those children of God whose two-fold habit makes them soldiers, and thus dangerous enemies of Satan. What are those habits?

First, to be a target of Satan we must be consistent in obedience to God. Obedience is way more than not failing to do evil, obedience is actively doing good. Obedience is active, it is doing something; the thing we are commanded to do. To be obedient we must pursue God through His written Word for knowledge of His will, then pursue God through our Advocate the Son for the power of the Holy Spirit so that we can do all the things He has commanded us by the strength He provides us. If we are not actively obedient we are not active duty soldiers.

Second, we become targets of Satan when we are actively sharing Jesus with others. The testimony of Jesus is the proclamation of God Incarnate, of God the Savior, of God the Resurrected, of God the Judge, and of God the King. This is where the human battle is ‘fought,’ when men are challenged to move from darkness to light.

When prison doors of blindness and death are opened to light and life then we are true soldiers and true enemies of him who hates God and seeks to kill and destroy all human life. The ashamed, the silent, the ignorant of the gospel are not enemies because they are no threat to Satan who keeps men dead, blind and imprisoned until the gospel is presented, understood and accepted which comes by faith and faith comes from hearing the word of God.

Hard times beset all humanity for a host of reasons. Those in a spiritual battle are only those who are actively obeying God and sharing Jesus with people who don’t know Him.