Bad Times and Good Times At The Same Time

Mathew 24.38 describes, in those days before the flood, people were eating and drinking, marrying and 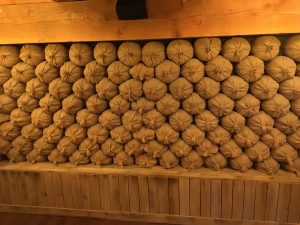 giving in marriage, until the day Noah entered the ark.

I had the recent pleasure of visiting the life size Ark built to replicate the one described in the Bible. God had Noah build an ark for saving his family and an animal remnant from God’s judgement of the entire earth for its rebellion against Him. It’s amazing the size while inside are descriptions and replications for how Noah might have housed, fed, watered and removed the waste of all the animals.

As I viewed the food storage I thought about how God would have needed to bless Noah with the resources he would have used for building the ark and accumulating the food for feeding everyone and everything on the ark. Since God doesn’t usually bless only one garden in a region I thought how difficult Noah’s message of impending doom would have been to receive among a people whose lives were going so well.

The blessing Noah needed for doing God’s will would have overflowed to those who watched him build the ark and prepare for it’s voyage. It is hard to hear God is angry when we are feeling blessed by God. It is hard to hear we are doing it wrong when everything is going so right.

I wonder if we are not in a similar time, at least in this country and at least economically and physically. Few can argue we are in a train-wreck relationally as a nation, the result of our, from the Christian perspective, spiritual and moral bankruptcy.

God promises a second judgement someday. This time He wont send a global flood but a global fire. The next judgement wont rescue 8 people but all those who love Jesus with all their heart, soul, mind and strength demonstrated by their obedience to His commands.

No doubt this message will fail to resonate with those whose lives are going well, who are eating and drinking and enjoying life thinking it and they, are all good.