Matthew 16.4 describes a wicked and adulterous generation looks for a sign, but none will be given it 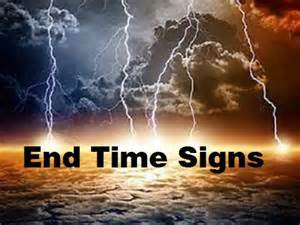 There are many in the Christian camp who believe we are close to the ‘end times.’

This belief has been prevalent in Christianity since its inception almost, the Apostle Paul discusses this issue in his letter to the Thessalonians who seemed to have quit working so they could stand around and watch for Jesus to return. Paul rebuked such behavior.

It is interesting who God says is busy looking for a sign that the end is near.  Most Christians would be appalled to be lumped in with wicked and adulterous people.

Yet many of those looking for a sign are part of that group, by God’s observation, or the indirect cause of that group by human observation. The sign seekers point out the immense evil in our world and the rampant rebellion against God and His ways.

They wring their hands of this social anarchy never making the connection that the Church is the salt and light in the world responsible for bringing flavor, restoration and clarity to the nations where the Church resides. It is the work of the Church to teach obedience to everything Jesus commanded by both word and deed.

The failure of the Church to win the culture is not the will of God since He desires all men to be saved and has promised the Church to be leaven that impacts the entire dough of society.

Sign seekers believe evil times point to a certain soon end times yet it was in evil times the Church began. The Church started as a small amount of leaven indeed but has grown to influence mightily the entire world.

Yet its influence has been waning these past 50 years. Because the end is near? Or because the Church has ceased to be salt and light?

The Church has begun to wrestle with such things as the authority of the Bible, the Deity of Jesus and the inherent sinfulness of humanity. When the Church denies its fundamental and foundational moorings it becomes ineffective and unproductive in its work.

The only sign we need is the sign of Jonah: after three days Jesus rose from the dead. True lovers of God believe this and are staking their lives upon it.

These are the ones not standing around crying the end is near while doing nothing to alleviate evil in the world.

True lovers of God do what Jesus did; they lay down their lives so that others might believe and by believing receive eternal life.