Job 24.1 asks ‘why are times not appointed by the Almighty? Why do those who know him not see his 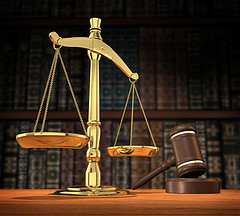 Job wants God to judge him believing he will be found righteous. His friends are accusing him of being an evil doer which is their explanation for the tragedy that is occurring in his life.

Job argues his trouble is not a result of his wrongdoing but rather the result of some injustice being leveled against him by God. Job would like to see God hammer the evil and reward the righteous.

I think we all fall into this ‘prayer’ that God would smash those who do evil and bless those who please Him.

The question of why does God wait to judge the wicked is a good one.

The problem we have with God not instantly punishing the wicked is that we can deceive ourselves into believing that we are somehow getting away with our disobedience before the Almighty. Without a healthy understanding of His Righteousness we will continue to do evil believing we are a special cosmic exception to God’s written will.

God has judged the evil of men once, it occurred at Calvary when He punished His Son. The wrath all people deserved was turned upon the One Who deserved none in order to pay the penalty for our disobedience and create the option of pardon for all who will humble themselves before Him.

This should terrify us and build a healthy fear of God into our hearts. The crucifixion proves God’s hate of evil and His commitment to deal with it.

Another judgment is coming. At the end of history God will not focus His wrath upon His Son for the evil humanity has done but rather each person will stand before God and be judged. The adopted will be pardoned and excused but those who rejected God by rejecting the Son, Jesus, will now face the wrath of God in full resulting in their eternal condemnation in hell.

God does not judge us for our evil today because He desires our reconciliation today. Today when we disobey, God gives us mercy so we might repent and not have to face His judgment to come.

God waits even for the worst of us to come to Him, this is how He demonstrates His great love for us.