The Source of Truth

Genesis 3.4 observes, the serpent said to the woman, surely you will not die. You would think that if God said something it 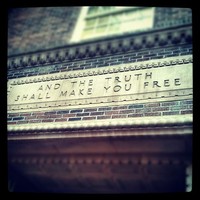 would be taken seriously and believed wholly. After all, it only makes sense that if there really is a God He would be honest, truthful and trustworthy.

(As an aside, no other religion beyond Christianity makes such claims about their god. All of the other gods from those of the Indians to the Muslims portray him or them as deceitful, conniving and manipulative).

Yet one ‘person’ claims God is not telling the truth and it is immediately believed. On page 3 of the Bible the first people believe the deceiver that God is indeed dishonest and lying only to discover at the cost of their lives that He is indeed honest, true and good and that they have been deceived by believing the lie.

When God visited us as one of us, one of the names He used to identify Himself was Truth. God declared, I am the Truth. God invites us to believe Him because He created us and He loves us demonstrating the immensity of His love through the sacrifice of His Son. God has done all that He can to convince us of His good intentions toward us. Still we don’t believe.

We ignore God’s true words recorded for all time in a book so we can repeatedly go back to them for truth, comfort and encouragement. Yet we don’t. We continue to believe those who deny God and tell us a ‘truth’ that denies the words of God. These ‘truth’ tellers fill the university and the news mediums and sometimes make their way into the pulpits of our Churches.

All those who deny Jesus as God and the sole means for escorting humanity safely into eternity with God are deceivers. Christians must return to the Bible and it’s focus upon Jesus as the Truth if we are to know the truth and live in obedience to the truth.

To ignore and deny truth is to suffer now and in the life to come.